As I write this, I can predict that OJ Simpson will be paroled. By the time most read it, he will already have been paroled (which is not to say he will have been released — that will happen in October). Here’s why.

The case against parole rests largely on Simpson’s sordid past — most especially his alleged murders of Nicole Simpson and Ron Goldman and the serial episodes of domestic abuse that led to multiple harrowing 911 calls and overwhelming evidence that OJ Simpson was (and is) an abusive monster.

Regardless how awful a human being OJ Simpson might be, and no matter how egregious his past conduct, our judicial system operates around a principle called due process of law. What due process means is procedural fairness. The system is not designed to manifest the grand notions of swift and sweeping justice one sees on television; it involves, rather, a slow and prodding and prickly process that belches and coughs more than it sings and serenades.

That sounds like a criticism, but it’s not. We don’t operate on emotion and suspicion and assumption; if we did, we’d be a third-world country (and God knows we’re headed in that direction briskly enough without abandoning our judicial standards, to boot.) The alternative to the proverbial rush to judgment is a process that requires lots of i-dotting and t-crossing and patience and restraint.

In that vein, states don’t make ad hoc decisions about who gets paroled and who doesn’t. They promulgate concrete standards and then do their best to adhere to them, recognizing, of course, that there’s no sure-fire safeguard against human folly. As to those standards, they reflect a preference for well-defined guideposts and exacting measures of proof. Fuzzy, metaphysical vibes get tossed out in favor of rigid, empirical substance.

One of the results of this approach, as unsatisfying as it might be to those who believe that OJ Simpson is a murderer (as I do, incidentally), is that the law takes little note of past conduct that was never formally documented or, if it was documented, never resulted in any formal finding of guilt or culpability. That’s the problem for those who wish to see OJ Simpson imprisoned in perpetuity on his kidnapping and robbery charges (the charges that landed him in prison in Nevada) on the basis of what he allegedly did to Nicole Simpson and Ron Goldman.

What OJ Simpson did to Nicole Simpson and Ron Goldman was the subject of a lengthy and expensive jury trial. The fact that the judge in that case, Lance Ito, let that trial descend into farce does not change its essential nature: a jury of OJ Simpson’s peers heard the evidence, considered it, and found Simpson not guilty.

That means that although there was an arrest and there were charges, there is no conviction. In a system built on rigid procedural standards of fairness, arrests and charges will only get one so far. And under Nevada’s parole standards, that’s not very far at all.

What are the standards for parole in Nevada?

Under Nevada law, the Parole Board is supposed to consider the following factors:

You might have noticed the reference there to “criminal history.” To hash out what that means, Nevada has promulgated certain guidelines. Because arrests and charges that do not result in conviction are not considered procedurally reliable evidence of wrongdoing, those guidelines only permit the consideration of prior convictions — especially convictions for crimes involving predatory behavior or violence. Again, although OJ Simpson was repeatedly accused of predatory and violent conduct, those accusations did not result in convictions.

You might also have noticed the reference above to an applicant’s “potential threat to society.” To evaluate that factor, Nevada has developed a “Nevada Parole Risk Assessment” form: 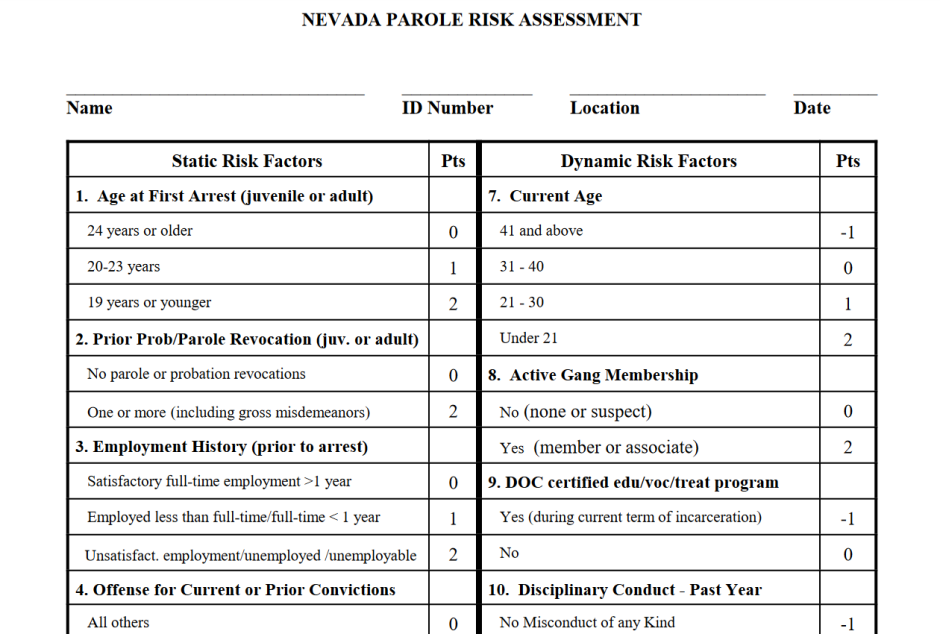 There are two references on the form to criminal proceedings outside the scope of the crimes for which the parole applicant was convicted and imprisoned. One of them, item 4, is a reference to other convictions, meaning that, again, the murder charges in the Nicole/Goldman case cannot be considered. The other involves the very first item on the form: “Age at First Arrest.” The guidelines for filling out the form state, “This factor is based on the age of the offender when he/she was first arrested (ever, including juvenile) whether or not they were convicted.”

This is the only reference you will find — the only one — in any Nevada parole document (meaning any document referring to any standard, factor, or guideline relating to parole) to prior arrests without conviction. And as to this reference, it’s not about the severity or violence of the crime for which the parole applicant was arrested; it’s only about the applicant’s age at the time of his or her first arrest. In other words, this information is only to be used to establish how long the applicant has been involved with the criminal-justice system, not how egregious the applicant’s criminal history might be.

There is no basis in the law for Nevada’s parole board to consider OJ Simpson’s allegedly murderous past in evaluating his application for parole. Having already served a long sentence for the crimes he was convicted of committing, he will likely be paroled.

No matter how distasteful that might be given the grizzly crimes he was accused of committing, we should be grateful that our legal system largely incorporates objective standards designed to prevent arbitrary decision making. (This is not at all to say that it always, or even often enough, succeeds.)

iThere are no comments

Begin typing your search above and press return to search. Press Esc to cancel.